Iemanjá — the goddess of the sea — and her special day

Getting up at 4:30 am wasn’t easy for night owls like us, but we knew that pre-dawn was the time to arrive if we wanted to catch the religious — sacred — part of the festival for Iemanjá. We jumped into the taxi to the Rio Vermelho neighborhood, lightly caffeinated, proud of ourselves for even making it this far.

While it was stupid-early o’clock, Avenida Oceanica, which snakes along the coastline, was already abuzz with revelers. Some stumbled about, beer in hand(?!?) still continuing the party of the night before. Others were freshly made up and ready to pay their respects.

We stopped at a friend’s flower stand to grab our offerings — blue and white for Iemanjá, of course, but also some yellow for Oxum. These would go into the ocean later.

Who is Iemanjá – the Candomblé Orixá of the sea

Iemanjá is one of the Orixás, or deities, of the Brazilian Candomblé religion — a west-African derived religion. This religious tradition arrived on the shores of Brazil with the enslaved Africans and survived the slavery era through synchronism with Catholicism and good old-fashioned trickery. Of the estimated 400 Orixás in the pantheon, 15-20 are regularly worshiped in Brazil. Of those 15-20, Iemanjá is considered one of the primary Candomblé Orixás in Salvador for two reasons.

Each year on February 2nd, the Candomblé faithful, not-so-faithful, and people who are just down for a good party converge on Rio Vermelho at the fishing weigh house known as the house of Iemanjá (Casa de Iemanjá).

The festival starts in the pre-dawn hours (or for some people, the night before) when most Candomblé faithful arrive to pay their respects. As we did, many buy flowers and stand in line to put flowers on the official offering that goes out to the ocean mid-afternoon. Others take their flowers and descend directly to the beach and make their offering from there. And yet others pay a private boat a small fee and go out and make their own offering right into the ocean. There is no right or wrong way to do it — just what feels right to you.

By around mid-day, the flower vendors are replaced by beer vendors, and the samba and samba-reggae bands start to fill the space. The semi-reverent murmur of the morning gives way to beer-fueled boisterousness. The street party continues until close to midnight — after the nationally-known acts like Carlinhos Brown and Mariene de Castro have finished up their shows.

What you need to know

Mind-blowing festivals are just one reason to visit Salvador 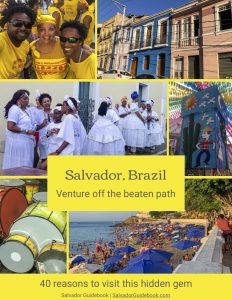